BROKEN HILL IS HOME TO MORE GALLERIES THAN PUBS

There are more than 20 galleries in Broken Hill. In fact, galleries outnumber pubs. Typical of the city’s colourful character is the art and attitude of the late Kevin “Pro” Hart. You can see Pro’s direct and humorous approach expressed in so much local art.

Take time to chat with the artists about their authentic, down-to-earth lives and you’ll understand where it comes from. There is also plenty of art to enjoy around the city streets – from intriguing sculptures in public parks to bold wall murals that depict Broken Hill’s heritage.

Art is even set amid the landscape outside the city – the sculptures in the Living Desert Reserve reflect both the diverse culture of the region and an appreciation for the city’s magnificent surroundings.

Step back in time and explore an extensive collection of Australian colonial art works. The Broken Hill Regional Art Gallery is the oldest regional gallery in New South Wales. Founded in 1904, it is located in the historic Sully’s Emporium Building on Argent Street, which provided heavy machinery for the local mining industry from 1885-1985. From 1999-2004 the building was refurbished and became the home of the Broken Hill Regional Art Gallery – a magnificent restoration recognised by numerous heritage awards.

It also provides an annual program of locally curated exhibitions, along with touring exhibitions from major cultural institutions.

Admission to the gallery is by donation.

The region’s thriving arts scene owes a lot to the “Brushmen of the Bush” – Jack Absalom, Pro Hart, Hugh Schulz, John Pickup and Eric Minchin. In 1973 they formed a group based on a shared love for painting the Australian outback and exhibited their artwork together for the next 25 years. True to the community spirit of the outback, during that time the group raised over $1 million for charities including the Royal Flying Doctor Service.

1000 large stones, 3000 clouds, 1500 hills and 12 sculptures. Most amazingly, all this is the creation of Ando, one very dedicated and industrious local artist, which makes the Big Picture the world’s largest acrylic painting on canvas by a single artist. Visit the Big Picture at the Silver City Mint and Art Centre and experience the sensation of walking into a painting at the same time as feeling like you are in the actual outback.

Aboriginal artists made their mark throughout the region thousands of years ago. At Mutawintji (130km north-east of Broken Hill) this legacy is apparent in the remarkable engravings of animals and animal tracks, as well as painted hand stencils and other motifs – some of the best examples of Aboriginal art in New South Wales.

Even the shortest stroll down Argent Street – the city’s main thoroughfare – and around some of the side streets is like walking through the contrasting fortunes of the city and its early residents. Federation and Victorian buildings stand grandly beside tin cottages and the curving faces of 1930’s art deco. More than 350 properties are officially listed as locally significant. Many feature on similar state and national heritage lists. Broken Hill is particularly known for its heritage hotels. In their heyday these pubs were essential as places of escape from the drudgery of working underground. Today, Broken Hill’s pubs are still the centre of attention – places to wet your whistle, swap stories, play music and dine in style.

You can easily lose track of time in this treasure trove of creativity where you’ll spy something new in every corner. The Silver City Mint and Art Centre Is an eclectic mix of artistic talent, big and small in the heart of Broken Hill. 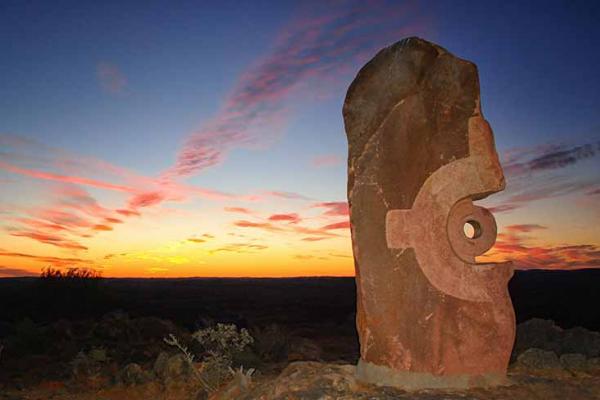 The awe inspiring Living Desert Sculptures are deservedly the most iconic and photographed attraction in Broken Hill. Nestled amongst the Barrier Ranges, the Living Desert Reserve is easy to access and located just 12km from the city centre. Take your time and explore the spectacular topography and scenery within the vast 2400ha reserve.